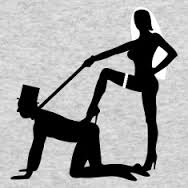 A naked man down on all fours, ankles bound, hood over his head, being walked on a leash by a woman wearing a purple nightgown.

A picture of the couple was snapped on a cell phone by a passing driver.

Tips led to an apartment building on Roney’s Point Road.

“The female at first denied any involvement,” Lt. Croft said. “We had a witness positively identify her, and she admitted it, as did the male.”

“They said it was consensual sex, a consensual sex game, and they were offended that people were stopping and calling them freaks,” Lt. Croft.

Deyell, who told deputies he was a willing participant, was not seriously injured, says Lt. Croft.

“Except for ligature marks, obvious ligature marks on his feet and ankles,” he added. “Other than that, he denied any injury. We won’t go into the other thing.”