Carter also blamed those skeptical of global warming for blocking attempts to regulate carbon dioxide emissions, and lamented that it was unlikely any landmark climate legislation would make it through a partisan Congress.

“The biggest problem we have right now is some nutcases in our country who don’t believe in global warming,” Carter said. “I think that they are going to change their position because the evidence of the ravages of global warming is coming or is already there.”

The former president’s one term in office was mired by energy woes, which pushed him to create the Department of Energy and push for increased resource conservation. During that time the economy was suffering from an oil shortage due to an OPEC oil embargo and federal price controls on energy.

In the midst of it all, Carter announced in 1977 that the world was on the verge of running out of oil and gas with which to power the economy. He warned that production would stop increasing in the 1980s as wells begin to run dry.

“The oil and natural gas that we rely on for 75 percent of our energy are simply running out. … World oil production can probably keep going up for another 6 or 8 years,” Carter said in his 1977 Energy Address to the Nation. “But sometime in the 1980′s, it can’t go up any more. Demand will overtake production. We have no choice about that.”

“To some degree, the sacrifices will be painful—but so is any meaningful sacrifice. It will lead to some higher costs and to some greater inconvenience for everyone. But the sacrifices can be gradual, realistic, and they are necessary,” Carter added.

“Oh yeah?, well I’m right about this one,” the befuddled peanut farmer insisted to FWIW. “I’m a scientist, and the science here is settled.”

There’s an app for that 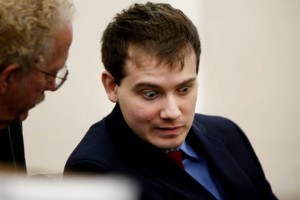 Pedro Bravo
He doesn’t look angry to me, just mad

When a Florida man allegedly strangled his roommate in 2012 and couldn’t find a good place to dump his body, he received help from a familiar source — his iPhone digital assistant, Siri.

“I need to hide my roommate,” Bravo asked Siri.

“What kind of place are you looking for?” she responded, before listing four of the best options available.

Wannabees beware: the iPhone records even showed how many times (19) he used the flashlight app that evening. They’re watching.

Why does everything bad always happen to ME?

The AP notes that every time the President attempts to go away on a summer vacation, something awful pops up to ruin his day, from revolutions to invasions to, two years ago, the Democratic National Convention. So far, the man has soldiered on bravely, complaining only about the really big things ruining his life such as, this week, the fact that the ocean off the Vineyard is too cold.

But that serenity could be in jeopardy, or it might be for lesser men. Yesterday Obama’s man at the Pentagon admitted that “the world is exploding all over”.  A more ordinary president of the United States might find that unsettling, but not Sunny B, who, the White House has claimed only learns of things going on around him at the same time as the rest of us and also admitted he “doesn’t learn anything from the news.”  Properly shielded from reporters trying to harsh his bud during this August break, Barry O should be able to continue to work on his golf game and ignore his daughters.

All of which is good news for those worried that the man’s golf vacation might be disturbed, but it seems a missed opportunity for the president to reflect on his policies of the past six years and consider whether they were somehow, even in the teensiest of ways, related to the world exploding around us.

And across the border in Stamford, 97 Deep Valley Rd took another price cut, to $4.995 million. I mentioned this property back in July, when, after failing to sell at prices ranging from $8.5 million to, finally, $5.9, a new broker was brought in and the price raised to $6.475. I questioned that strategy then, and it seems that it indeed, it didn’t work.

The house is beautiful, in a Stamford-sort-of-way, and its location on the Mianus is pretty spectacular, but it continues unsold as its price fluctuates. I don’t know what the Stamford market will support for a home like this but so far, the $8.5 -$5 million-plus range isn’t it. 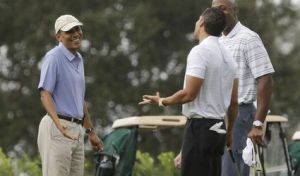 Taking a brief break from his golf game Tuesday, President Obama spoke out about the shooting death of 18-year-old Michael Brown.

“Heartbreaking”, the president said. “Michelle is grieving, and I’m pretty blue myself – I mean,  if I had a caddy who wasn’t a member of the Secret Service, he’d look like Michael. Fore!”

And Walter Noel skates away, again 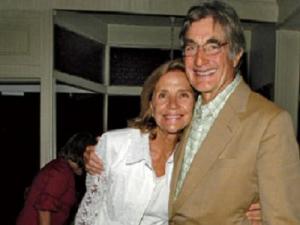 News today that the father-son founders of GMB Capital have pled guilty to fraud and will spend five years in jail. What did these guys do? They promised investors that they’d  trade their money using super-secret algorithms invented by the farther, MIT professor Gabriel Bitran , and instead gave the money to Walter Noel’s  fund of funds Tremont Group, which in turn shoveled it over to Bernie Madoff.

So the Bitrans are guilty of telling investors that they’d employ one trading strategy but instead, they simply entrusted the money to a fund of funds group which, unfortunately was run by Walter Noel.

Walter Noel promised investors that he’d place their money with a meticulously selected group of other hedge funds, each managed by individuals scrupulously vetted by Noel and his experts. Instead, he did no due diligence, he used no other hedge funds, turned everything over to a single fund, the Madoff Scam LLC, and lost everything.

“The Bitrans’ funds suffered losses of more than $140 million. The men paid themselves as much as $16 million in management fees over the life of the businesses and recovered $12 million of their own investments when the funds were doing poorly, the U.S. said, adding that the two discussed their scheme in e-mail exchanges.”

Noel and his co-conspirators lost billions, paid themselves hundreds of millions of dollars, and have paid back something like $50 million of that, leaving them plenty of money to maintain the Noel lifestyle, keep their multiple residence, jet and cruise around the world and buy NYC townhouses for the five Noel fillies.

Walt seems to be shaping up as the Greenwich version of Jon Corzine; funny, he doesn’t look smart enough or have secrets enough to pull that off.