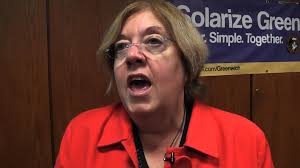 It’s easy to see why she scares Tesei witless, but still …

This story’s been under the counter for a while but Greenwich Time finally writes it up: Denise Savageau, our town’s “Conservation Director”, has derailed the proposed expansion of the town’s low income housing project, Adams Gardens (I assume the name is ironic) in Old Greenwich.

You should understand that Savageu has no official authority to waddle into this matter, just as she had no power to try to stop the restoration of the Visitor’s Center at Tod’s Point. That doesn’t stop her; indeed, nothing short of a garlic-rubbed stake through the heart will keep this woman out of town affairs, and our First Selectman Tesei clearly can’t wield one.

After nearly a year and a half of struggling through the town’s land-use regulatory procedures, the Housing Authority of Greenwich’s plan to expand housing at Adams Garden has hit another snag amid renewed concerns over drainage and flooding. Land use officials will meet to discuss the application, following Conservation Director Denise Savageau’s urging to reexamine the potential impact to two man-made ponds at the Riverside complex.

“It is problematic when some of our most vulnerable residents are placed in a flood zone where evacuation may be necessary,” wrote Savageau in a letter to the Planning and Zoning Commission. “This is especially important for multi-family structures.”

But Housing Authority officials say the continued worries were already well-addressed during lengthy proceedings with the IWWA last year and that the delays are unfounded and costly.

“We have already met with all the department heads other than Denise,” said Anthony Johnson, Executive Director of the Housing Authority. “We didn’t make this plan in a vacuum.”

At an occasionally tense [emphasis added for understatement] July 29 Planning and Zoning Commission hearing on final approval of the project, commissioners voted unanimously to put off voting on the application for a month to give time for continuing consideration of ongoing wetlands problems.

[T] he Housing Authority is rejecting both the criticisms and the process that brought them about.

“We were surprised that this conversation came in again at the last minute,” said Johnson. “I’m not disappointed, but a little surprised that at the twelfth hour these concerns come up when the project has been vetted beforehand. Maybe there’s a process problem in Planning and Zoning.”

Currently, the Conservation Commission advises the Planning and Zoning Commission while it is making its decisions, unlike other land use agencies, which vet applications earlier. Johnson suggested future redundancies could be prevented by having Conservation meet with applicants prior to their going before Planning and Zoning, so they could address concerns earlier rather than cause delays during the final steps of a project.

“A delay in construction is dollars,” said Johnson.

But of course, delay, and the flexing of her ample torso muscles, is what Savageau’s last-minute weigh-in is about. She had a year-and-a-half to squawk about the hypothetical dangers facing ” our most vulnerable residents” -sniff – but she waited until the entire approval process was nearly complete before trampling onto the scene. Shame on the Planning & Zoning Commission for conceding to her, but really: where is Little Lord Fauntleroy? He’s supposed to be in control of employees like Savageau.