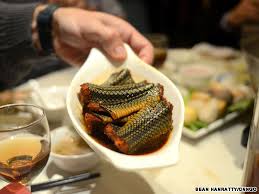 Peng Fan had just finished preparing an Indochinese spitting cobra for a soup when the serpent’s severed head clamped down on his hand, injecting him with a fatal shot of venom, the Mirror reported.

Peng reportedly had decapitated the snake 20 minutes earlier, but he was doomed by the cobra’s long-lasting, reptilian reflexes that persisted even after death.

Stunned diners were startled by the chef’s final cries.

“We did not know what was happening but could hear screams coming from the kitchen,” diner Lin Sun, 44, told the Mirror. “There were calls for a doctor in the restaurant, but unfortunately, by the time medical assistance arrived, the man had already died. After that we did not continue with our meal.”