And I demand a government doublewide

After throwing a monkey wrench into the works at last month’s P&Z hearing on the matter, the expansion of affordable housing at Adams Gardens in Old Greenwich is going forward. You can read the article to get the details,but basically, Savageau, a large woman employed by the town as our “conservation director”, claimed that she wasn’t satisfied with the evacuation plan for the exiting complex (which has been there since 1949) because it housed “some of our most vulnerable residents”. Housing Chairman had the right response:

Despite the likely approval of the project at the Planning and Zoning Commission’s September meeting, Romeo said he remained frustrated by the unnecessary delay.

“I’m just upset by the fact that some of the statements made were misleading,” he said. “I felt that (Savageau) was denigrating the people in public housing, like they need government to care for them. I just take offense to the attitude that government is the only answer.”

These “affordable housing” apartments are rented to town workers and other families, with income limits of, I think, somewhere around $65,000 per year. The only thing “vulnerable” about them is that Savageau considers them wards of the state, and thus her responsibility.  They aren’t either, and Savageau’s attempt to portray them as such should have resulted in her being booted out of that first P&Z meeting, rather than listened too, however cursorily.

Does Peter Tesei even understand that he has the power to hire and fire people like Savageau? Would someone please inform him that he does? And lend him a backbone to do it?

The masked jihadist known as “John the Beatle” has been identified by British security services, sources said Saturday.

The masked man with a London accent, who is said to be known to fellow fighters as “Jihadi John”, was seen in the shocking video of Foley’s death released by the Isis extremist army last week.

While sources gave no details of the man they have identified, a key suspect is Abdel-Majed Abdel Bary, 23, who left his family’s £1m home in Maida Vale, west London, last year. He recently tweeted a picture of himself holding up a severed head.

“It is horrifying to think that the perpetrator of this heinous act could have been brought up in Britain,” British Foreign Secretary Phillip Hammond wrote in the Sunday Times.

In addition, Hammond referred to the actions of “John the Beatle” as “an utter betrayal” of everything the British stand for, The Sunday Times reported.

Horrifying, maybe, but not surprising. Islam recognizes no secular state, so a Muslim bred and raised in such a state owes no allegiance to it and will not consider his actions to be a “betrayal”.

They’re swarming in Austria, Sweden, Denmark and the Netherlands, and every other European country – just do as I just did to find links to these four countries: Google “Muslim violence (name that country)” and you’ll have a inexhaustible supply of news, stretching back decades. So who doesn’t get this? Our Secretary of State, for one, who just last week, speaking to the Foley execution, said:

ISIL is the face of that evil, a threat to people who want to live in peace, and an ugly insult to the peaceful religion they violate every day with their barbarity.

ISIL is the face of Islam, you silly twit, and as such, is the logical ending for the Islamic goal of world domination. 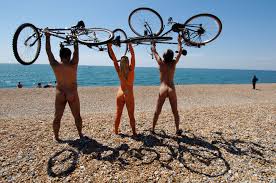 Unlike the United States, English litigants who lose in court must pay the winners’ legal fees. This can have a sobering effect on towns that join pressure groups of their residents to fight development on spurious grounds.

Portsmouth City Council is to pay £475,000 in legal fees after losing a string of court battles with defence giant QinetiQ.

It had tried to stop the firm’s plans for a road to three new blocks of flats it was building overlooking a nudist beach near Fort Cumberland in Eastney.

It said the work may harm the legally protected Dartford warbler thought to be nesting nearby.

But after racking up £150,000 in legal fees, and with a ruling saying further searches for the rare bird were unnecessary, the council had to agree to the road.

So had the rare birds flocked together to persuade the town to expose itself to such grievous liability? No, it was birds of  no feathers.

Naturists launched a campaign to stop the development amid fears that it would prevent them using the beach.

Here in the Land of the Free, opponents of projects they don’t like also exploit our environmental laws and every other legal leverage tool they can find to delay and even stop developers; the difference is, our system doesn’t make them responsible for the costs of their tactics. The English system would give them pause.