And speaking of war and lawyers

New Ebola Czar, attorney and spin doctor Ron Klain, has already skipped two meetings on the war on Ebola. “He’s busy with paperwork,” the White House explains,” but we expect him to report for duty next week.” A clearly miffed president lashed out at his new appointee, complaining to FWIW when reached on the 17th tee, “there’s no point in my delegating responsibility to people if they’re not going to do the job the American people are paying me to do – sheesh, why do I even bother?”

And speaking of wars and lawyers

Berkeley votes next month on imposing a sugar tax.

The initiatives would place a tax on most soda and sugar-sweetened drinks — including sports drinks, ice tea, juice drinks and energy drinks. They would generally not apply to fruit or vegetable juice, infant formula, milk or nutritional supplements. Nor would they apply to diet drinks. (Of course, the food Nazis have now targeted fruit juices and smoothies as “worse than soda, but that’s next year’s battle).

The mayor the enlightened city, one Tom Bates, explains why the tax will pass: “Berkeley is an extremely educated community,” he said. “We have more Ph.D.s than anyplace in the United States except Cambridge. It’s a very intelligent community.” And thus, has an intelligent ruling class that knows best what’s good the the uneducated masses.

Either this madness stops, or we do

Cry havoc, and let slip the lawyers of war

U.S. Army combat brigades are now being deployed with lawyers in the command post. A recent Huffington Post profile details the role of Major Megan Wakefield, paratrooper and legal advisor in the 82nd Airborne. As the report suggests, it is now common procedure for operations to be run by these legal eagles for preemptive approval:

In the midst was Maj. Wakefield. In a sweltering corner of the tent that houses the brigade’s Tactical Operations Center (TOC) she would listen intently to operations officers outlining planned missions: an enemy force with trucks and tanks to be destroyed with 155mm artillery fire; an enemy anti-aircraft missile position and dug-in heavy artillery to be destroyed; a cache of enemy weapons to be destroyed with one precision-guided bomb and four rounds of artillery.

When Maj. Wakefield clears her throat, heads swivel. She too has questions: are the human targets positively identified as enemies? Are they demonstrating hostile intent? Because if not, you can’t engage, she reminds them. And if you can engage, should you?

If I were asked to advise a young person on career choices, I’d tell them in the strongest possible terms to avoid the military.

And the left cheers 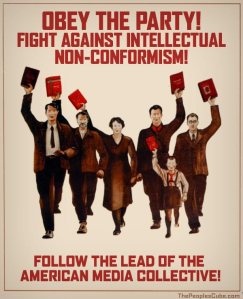 The National Science Foundation , a federal agency whose mission is to “promote the progress of science; to advance the national health, prosperity and welfare; and to secure the national defense,” is funding a project to collect and analyze your Twitter data.

The project is being developed by researchers at Indiana University, and its purported aim is to detect what they deem “social pollution” and to study what they call “social epidemics,” including how memes — ideas that spread throughout pop culture — propagate. What types of social pollution are they targeting? “Political smears,” so-called “astroturfing” and other forms of “misinformation.”

…. Focusing in particular on political speech, Truthy keeps track of which Twitter accounts are using hashtags such as #teaparty and #dems. It estimates users’ “partisanship.” It invites feedback on whether specific Twitter users, such as the Drudge Report, are “truthy” or “spamming.” And it evaluates whether accounts are expressing “positive” or “negative” sentiments toward other users or memes.

The Truthy team says this research could be used to “mitigate the diffusionof false and misleading ideas, detect hate speech and subversive propaganda, and assist in the preservation of open debate.”

Hmm. A government-funded initiative is going to “assist in the preservation of open debate” by monitoring social media for “subversive propaganda” and combating what it considers to be “the diffusion of false and misleading ideas”? The concept seems to have come straight out of a George Orwell novel.

The NSF has already poured nearly $1 million into Truthy. To what end? Why is the federal government spending so much money on the study of your Twitter habits?

Some possible hints as to Truthy’s real motives emerge in a 2012 paper by the project’s leaders, in which they wrote ominously of a “highly-active, densely-interconnected constituency of right-leaning users using [Twitter] to further their political views.”

So where is the left on this move to destroy the First Amendment? Silent so far, but when the same FCC commissioner, (Ajit Pai, Republican, appointed by Obama) who is exposing this plan earlier this year denounced the FCC’s plan to monitor newsrooms, he was denounced by the Huffington Post as a tool of the right and Rupert Murdoch. We can expect no less, or more, from them this time because, when you lack principles and base your judgment on a particular situation, it is impossible to see that the worm may turn, on you.

Problem solved, it’s back to work 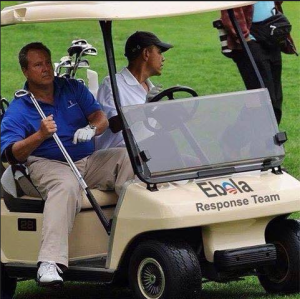 We got it covered, relax!

Having handed over the handling of the Ebola crisis to his new Ebola Czar, Obama returns to the links.”What about me?’, Obama complained to FWIW when questioned on his priorities, “don’t I get to have any fun?”