Now it can be told: the REAL reason Obama flew out to Nevada to speak to his Mexican friends

He had a golf game scheduled. Played 18 rounds and enjoyed it so much that he played nine more.  By the way, this marks the 204th round of his presidency, and the 204th time he’s refused to play with a girl.

And another useless question

San Francisco Gate: The disgrace of Bill Cosby and what you can do about it.

I hadn’t realized I had to do anything about the old pervert, and reading the SF column, I’m still not convinced I do.

Well, falling naked out of a ceiling does tend to make one cranky

Take this guy, for example: kicked his beagle when he got home 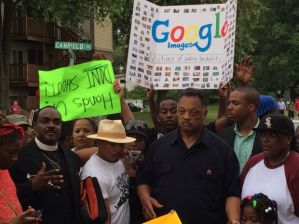 As the monsters of the ghetto, aided and abetted by the president of their United States, prepare to riot in Ferguson, a new theme has emerged, as reported by the LA Times: “Women find their voice in the protest movement”.

[R] efusing to be silenced, Elzie and her peers have elbowed to the front lines of protests over the Aug. 9 shooting of unarmed, black, 18-year-old Brown by Ferguson Police Officer Darren Wilson. As a tense Ferguson awaits a grand jury decision on whether Wilson will be criminally charged in the shooting, many women will be behind the protest bullhorns in the days and weeks ahead.

Inspiring, but there’s also  practical side to this development:

Tony Rice, a Ferguson resident who became a dedicated demonstrator [is that like a job, or something?] and tweeter in the city’s protests, said he doesn’t think he has talked over women, though “as women they’ve probably picked up on stuff I’ve done.”

Over the months, he said, the protests have become a “women-led movement. … They’re stronger, smarter, sober. A lot of guys are saying, ‘I can’t be up there [on the front lines], because I’ve got warrants.’

The reason that every professional colored person, from Al Sharpton to Jesse Jackson to Eric Holder and Barry O, have been licking their chops over the upcoming grand jury decision is that they all know there is no evidence to indict the officer who shot Ferguson, so there will be dissatisfaction in the mob. Professional colored people’s jobs depends on exploiting that dissatisfaction, so they’re ready.

And, thank God, the women are now empowered, and can join in the circus.

News you can use

Fried rice and children at weddings

You can now go ahead and draw up your daughter’s wedding menu, depending on who you’re expecting to show up.