Well if mockery couldn’t stop it, we’ll do it with executive orders 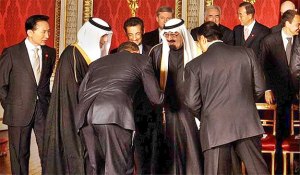 After the election I’ll have more flexibility, your majesty

Taking direct aim at the oil-and-gas industry, President Obama on Wednesday put forth long-awaited regulations on methane emissions, setting an ambitious goal of reducing those emissions by 45 percent over the next decade.

“The U.S. is now the largest oil-and-gas producer in the world, providing an abundant source of energy to power and heat American homes and businesses [despite Democrats’ best efforts] ,” White House energy and climate change adviser Dan Utech told reporters Wednesday morning. “At the same time, methane … is a potent greenhouse gas with 25 times the heat-trapping potential of carbon dioxide.”

Even though methane emissions are down 16 percent since 1990, the White House says they might rise over the next 10 years unless dramatic actions are taken. Under the plan laid out by the Environmental Protection Agency on Wednesday, the oil-and-gas sector must reduce methane emissions by 40 to 45 percent by 2025.

That’s because the ridiculing of drilling advocates has failed so spectacularly.

Back when gas topped $4 a gallon, Republicans chanted “drill, baby, drill” at rallies across the country — arguing more domestic drilling would increase supplies, reduce dependence on foreign oil and boost the U.S. economy.

Democrats, almost universally, mocked the GOP plan. In 2012, President Obama called it “a slogan, a gimmick, and a bumper sticker … not a strategy.”

“They were waving their three-point plans for $2-a-gallon gas,” Obama told a laughing audience during an energy speech in Washington. “You remember that? Drill, baby, drill. We were going through all that. And none of it was really going to do anything to solve the problem.”

“‘Drill, baby, drill’ won’t lower gas prices today or tomorrow,” Rep. Janice Hahn, D-Calif., echoed on the floor of Congress in 2012. “But it will fuel our addiction to fossil fuel.”

Today, Democrats are singing a different tune, as increased domestic drilling has led to a record supply of domestic crude, put some $100 billion into the pockets of U.S. consumers and sent world oil prices tumbling.

The price of a gallon of regular gasoline on Monday was $2.13 nationwide, and below $2 in 18 states.

11 responses to “Well if mockery couldn’t stop it, we’ll do it with executive orders”