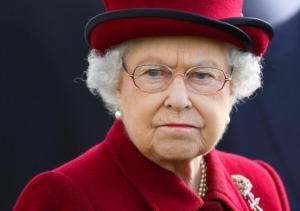 We are not amused

The Queen has ordered her underlings to “consider” permitting DNA to be introduced as evidence in peerage disputes.

The Queen has commanded Britain’s most senior judges to decide if DNA evidence can be used for the first time to settle a dispute over a hereditary title, in a move that could have far-reaching consequences for the aristocracy.

Her Majesty personally ordered Lord Neuberger, Britain’s most senior judge, and six other justices of the Supreme Court to rule on a bitter family dispute over who is the rightful heir to an ancient baronetcy.

The feud was unexpectedly sparked by an innocent family tree project involving a distinguished lineage dating back to the 13th Century.

Scientific analysis dramatically revealed that the last baronet came from a different bloodline to his relatives, suggesting there may have been an illegitimate child in a previous generation.

The two rival branches of the family have now spent thousands of pounds on a legal battle over which is the true lineage.

The peerage authorities were called upon to decide if the genetic material could be used to determine who should inherit the Pringle of Stichill baronetcy, and it was up to the Queen herself to order that a powerful but little-known court of top judges should make the ruling.

If the Judicial Committee of the Privy Council agrees that DNA evidence can be admitted in the case, it can then be used in any future claim to the peerage.

This could have huge implications for the whole of the British aristocracy – and possibly even the Royal Family itself – if it means ‘pretenders’ emerge with genetic evidence to prove their right of succession.

British history is pretty much nothing but battles between royal bastards, so using DNA to sort things out should produce quite a muddle – castles relinquished, coats of arms discarded and, best of all, some lawyer out in Utah may prove to be the proper King of England.

James Ord, 39, from Salt Lake City, joked that if DNA was introduced in such cases he may be able to make a claim to the throne.

Mr Ord, a distant cousin of an American seaman rumoured to be one of George’s children, said the story was ‘family lore’. ‘I want to know my history because it fascinates me,’ said Mr Ord. ‘But of course I won’t have any legal claim on Buckingham Palace!’

The chances of any of the Royal Family submitting to genetic tests is unlikely.

Ord may disclaim any interest in dethroning Queen Elizabeth now, but if he can grab a water glass from her palysied grip and have it tested, he just may find the lure of one of the world’s largest fortunes irresistible.

Whatever is causing it, it probably isn’t Connecticut’s new gun laws

Connecticut has one of the nation’s strictest set of gun laws, Vermont one of the most lenient.

There’s no less liquid “asset” than a boat

The firm has promised to provide $25 million of capital to Boat Finance LLC, a venture founded last year in West Palm Beach, Florida. The startup will initially focus most on used vessels, which “already experienced accelerated depreciation,” Blue Elephant said in a statement set to be released Friday. That limits the risk of losses in the event that the boat needs to be seized and sold, it said.

Papa Fish Nygaard, formerly of Fjord Fisheries, once told me of his fleet of catering boats, all of which he was about to lose to bankruptcy, “Chris, there’s nothing easier to buy than a ship, and nothing harder to sell.”

Loaning on a piece of collateral that sheds value faster than the Titanic lost its grip on the surface strikes me as a dumb idea, but then, I haven’t worked on Wall Street.

Well then, we’re off – if you’re ever in Washington, drop in

Obama withdraws our only carrier from the Persian Gulf

Military officials previously warned of the aircraft carrier’s removal and its negative impact on U.S. capabilities in the region.

“Without that carrier, there will be a detriment to our capability there,” Adm. John Richardson, currently the chief of Naval Operations, told the Senate Armed Services Committee in July. While the USS Harry S. Truman will likely replace the carrier, it could be up to two months before that happens.

The removal comes just as the Obama administration on Friday ended its $500 million Pentagon program to train and arm Syrian rebels fighting IS in an acknowledgment of its failure.

At the same time, Russia has been boosting its military activity in the region over the last few weeks, sending military equipment and troops to Syria and starting to launch airstrikes in the country. Russia is also launching cruise missiles from ships in the Caspian Sea at targets in Syria and allegedly putting “volunteer” forces on the ground in the country.

“You’ve got to understand”, the President assured worried Americans today, “when an imperialistic power like us stops oppressing folks, more responsible world powers will work together to help them heal. And Vladimir’s gonna help in that process – he’s promised me.”

Our new ruling class and no, it’s not a bunch of white guys on Wall Street

Receiving visitors in the Oval Office

The total compensation average for federal workers is $119,934, including the value of leave, insurance and other perks, or 78 percent more than the average total compensation for private sector employees of $67,246. The BEA analysis excluded U.S. Postal Service workers.

The 2014 average federal salary in 2014 of $84,153 compared to $56,350 for all private sector workers. The 2014 salary average represented the first annual increase since 2011 when a partial pay freeze was implemented in a budget deal between President Obama and House Republicans.

So the plumbers, hairdressers, leaf rakers and dentists of America now labor to support their bosses, who at one time were considered their “public servants”.

All hail the new Caesar.

And also from Japan, a complete home breaker

New home decorating fad urges followers to go through house “and throw away anything that doesn’t bring you joy”.

The KonMari craze has been (literally) sweeping the world. The result? People’s lives have become streamlined, more fulfilling and happier. Bloggers and lifestyle consultants are hooked.

So KonMari? It’s the process of going through everything you own and asking: ‘Does this spark joy?’ If the answer is no, then the item is binned.

Nobu’s new laundress.
(Walt’s got one on order)

On the heels of sex robots, now comes one that can wash, dry and fold laundry.

Of course, there are also robots around that mow the lawn, so really, who needs husbands, either?

The country’s gone mad. Well okay, it’s been in that condition for at least a couple of decades, but still …

I’m Carmelita Co-ed, and I’ll be your waitress tonight, si?

Clemson University apologizes for staging “Mexican Night” at its cafeteria, promises never to do it again.

Everything was going great. Students were loving the food and festivities. Except for two students, who took to Twitter to voice their displeasure with the school’s decision to host such a “#CUlturallyInsensitive” event.

“This is something that Clemson Dining has done for years without any sort of backlash. People love the cultural nights in the dining halls,” Pendergist said. “What’s next? Are they going to take away all potato based food as to not offend students from Irish decent? Remove the stir fry station so Asian-American students don’t feel as if they are being misrepresented? When does it end?”

“It is the mission of University Housing & Dining to create supportive and challenging environments that enrich and nourish lives. We failed to live out our mission yesterday, and we sincerely apologize,” Hallenbeck said.

Dr. Hallenbeck went on to promise that the university “will continue to work closely with [its] food service provider to create dining programs that align with Clemson University’s core values.”

The event, which Pendergist said consisted of “a couple balloons, sombreros, and some tacos,” is one of many culturally themed events put on by the Clemson Dining Services throughout the year. For one such event, the university held an event titled “Low Country BBQ Bash,” where students were invited to “Pick up a plate of mighty fine fixins.”

The university has also previously held St. Patrick’s Day-themed events, where students were invited to a dinner of “cornbeef, fried fish, and Irish grilled cheese.” Both those events, it seems, were uncontroversial.

“For as long as I’ve been here, and probably for much longer, Clemson dining has put on certain culinary theme nights, where they decorate the dining halls and serve whatever kind of food. They have Italian night, Mexican night, seafood night, midnight breakfast, all kinds of events,” Pendergist told Campus Reform.

Pendergist went on to say he “can’t imagine how they’re going to react when they discover that Taco Bell is a thing.”

Seagulls seem to already be clearing the pond

The peanut bunker, one of the favorite foods for striped bass, are in the area, and some have even turned up in Binney Pond, much to their (fatal) distress.

The bass are moving south now, heading for warmer waters – they left Maine waters last month – but if the bait’s still around, they probably are too.

Your fishing report for the day; we try to be a full service blog.

I suspect it’s futile gesture, and that’s (almost) too bad, because it means two more years of Peter Tesei and his fellow goofs running the town. Couldn’t we just disband the whole bunch of them and start over?