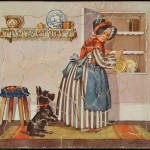 U Conn trustees have voted to hike tuition 31% over the next four years.

Before the trustees voted, UConn President Susan Herbst said the tuition increase is necessary to close what will be at least a $40.2 million budget deficit next year.

“We must also maintain our academic quality for the long term while closing those deficits,” Herbst said. “… “when it comes to UConn’s finances, it’s not “an either/or question.”

“The reality is that we need to increase tuition and cut costs simultaneously in order to generate the resources needed to protect academic quality and student outcomes,” Herbst said.

[W]e must bear this in mind: No university cuts its way to success,” Herbst added. “No university strengthens academics by slashing academic budgets … That is what we are seeking to avoid.”

I was just a teensy bit skeptical about both these administrators’ claims – they reminded me of Nancy Pelosi’s improbably boast that there isn’t “a nickel to be spared” in the federal budget”, so I thought to browse through the university’s Course catalogue, just to see if I couldn’t spot a few courses that could be dropped and their faculty fired without any noticeable harm done to the institution. Herewith, a few random courses that probably meet that criteria. I’ve linked to the entire catalogue so that readers can peruse it all.

Baseball in historical, political, sociological, and economic contexts. Topics may include: impact on individuals and families; racial discrimination and integration; labor relations; urbanization; roles of women; treatment of gay athletes; and implications of performance-enhancing drugs.

The origin, nature, and consequences of white racism as a central and enduring social principle around which the United States and other modern societies are structured and evolve. CA 4.

3622. History of Gender and Sexuality in Latin America and the Caribbean

Topics may include: empire and colonialism/anti-colonialism; slavery, science, and the state; cultural practices and institutions; feminisms and masculinities; law and public policies; immigration; forms of labor and political mobilization; sex and reproduction; and human rights from historical perspective.

An introduction to major philosophical and theoretical debates at the core of black feminist thought, emphasizing the ways in which interlocking systems of oppression uphold and sustain each other.

The role of ethnicity and race in women’s lives. Special attention to communication research on ethnic and racial minority women. CA 4.

Differences in male/female communication, and an examination of cultural assumptions regarding gender in the communication process. Critically analyze the theory, politics and practice of communication and gender.

Interdisciplinary scholarship on racial identity, legal decisions, and political action from the perspective of political science and political theory. Topics include interactions between states and social movements, the intersections of race, class, gender, and membership, and the problems with both post-racialism and identity politics.

3209. Sustainable Energy in the 21st Century

Political, socioeconomic, environmental, science and engineering challenges of energy sources; comparison of feasibility and sustainability of energy policies around the world.

How women and gender circumscribe political life and generate relationships of inequality and justice on a global scale. Topics may include conflict and security, development, human rights and legal systems, labor and migration, nation building, political economy, and transnational justice.

3237W. Democratic Culture and Citizenship in Latin America [is there one? – Ed]

3239. Politics of the Environment and Development

Politics of the environment and development with a focus on environmental issues in developing countries.

Gender aspects of war. Masculinities and militaries; gender-based war violence; laws of war and post-war conditions for male and female soldiers and civilians.

Internal development of the South African state and the external response to apartheid policies, with special attention to both white and African politics, U.S. policy, and other selected topics.

Political and human rights implications of regulating contemporary global supply chains: official regulatory frameworks; non-regulatory approaches to rule-making (such as voluntary corporate codes of conduct and industry standards); social responses to the dilemmas of “ethical” sourcing of goods and services.

Examination of the usage of torture by state and non-state actors. Questions include, “Why is torture perpetrated?” “What domestic and international legal frameworks and issues related to the use of torture?” “How effective are existing legal prohibitions and remedies?” “Who tortures?” and “How does torture affect transitional justice?”

Relationship between democracy and inequality. Economic inequality and its causes, poverty, public opinion, inequalities in political voice and representation, public policy, the role of money in politics.

Examination of contemporary public policy through the lens of race.

An introduction to major philosophical and theoretical debates at the core of black feminist thought, emphasizing the ways in which interlocking systems of oppression uphold and sustain each other.

Legal and political history of the relationship between Puerto Rico and the United States with an emphasis on the question of United States empire and the politics of cultural resistance.

An introduction to feminist thought, the study of women as political actors, the feminist movement and several public policy issues affecting women.

Well we knew this all along, and were singing about it way back when

Don’t know why they took so long to come to grips with it, but scientists now acknowledge that Hitler had only one big ball.