The reported sale of Copper Beech for $120 million was baffling because the property was simply not worth anything like that amount; I’d guessed $35-$45 million, others thought a bit more, but $120 million? Not a chance. The two rumors floating around were that the buyer was either (a) a Russian, seeking to move assets out of Putin’s reach or (b) Greenwich’s Ray Dalio, founder of the world’s largest hedge fund, Bridgewater. I could understand, maybe, a Russian paying a huge premium over market value for property if his primary concern was getting his money over here, but why on earth would Dalio pay so much?

It turns out, he didn’t. Dalio’s been “confirmed” as the buyer (confirmed by impeccable sources, but remember: ten years ago, Dick Cheney was convinced by his impeccable sources that the Copper Beech mansion was stuffed with WMD), and the speculation is that he bought the $120 million debt owed on the property at a steep, steep discount.

Now that makes sense. Copper Beech’s lenders loaned their money based on timberland owned in the northwest and the Greenwich property. The timberland plummeted in value when the feds shut down lumbering to save the spotted owl and the Greenwich property by itself was never sufficient to cover the debt. (The full history of the property and Copper Beech’s owner, John Rudey, can be found here, in the NYT).

Some years ago, when a workout of the loan was being discussed, Fudrucker was approached by an out-of-town appraiser retained by the lender to come up with Copper Beech’s value. FF and I spent a fair amount of time looking at subdivision possibilities and the value of the mansion itself and came up with that $35-$45 million value.

Whether or not that was the final figure the appraiser gave his employer is unknown, but it’s unlikely they were under any illusion that their loan was secured in full. So enter Ray Dalio. Mystery solved as to the buyer but remaining unanswered, so far, is the fate of the property: a donation to the town for parkland, as wishful dreamers hope, or the new location of Chateau Dalio?  Time will tell.

I said it then, it’s inching closer to proving me right

Ogilvy & Associates has cut the price of the Greenways/Copper Beech estate another $10 million to $130,000, down $60 from its opening price. Last May I noted that Ogilvy held the record for largest fall from asking to actual selling price: the Helmsley place, $90 million price cut; and predicted that he’d break his own record for this one. $60 million isn’t $90 million, yet, but back in September, when this property took its first price cut of $50 million I predicted an eventual selling price of $45 and, even if I was too conservative then,  there’s still plenty of room for that $90 to be surpassed.

499 Indian Field Road, which made headlines around the world when it was listed a few months ago for $190 million has, as predicted here, taken the first of what will probably be many price cuts. Today, that same property can be yours for the bargain price of just $140 million. Also as predicted here, the same reporters who gave Ogilvy such great press originally will not be around to report on this or subsequent price cuts. Smart man, that Ogilvy and a master at garnering free publicity.

I’m still holding to my prediction of $45 million, tops.

Further down the price scale and across the street from the water, 7 Stormy Circle (I kid you not) reports an accepted offer. It asked $1.680 in 2004 and didn’t get it. Owner brought it back at $1.095 this year and found a buyer.

So how much is Greenways / Copper Beech really worth?

Probably not the $190 million being asked for it. I was playing with some napkin calculations and here’s my guess, completely unsupported by accurate surveys, wetland delineations and so forth, so you know how much credence to give it:

Of its fifty acres, there are probably no more than five  or six building lots it can accommodate after wetlands, tidal lands, road set asides, conservation set aside, etc. are deducted and accounted for ( and deduct the two islands – they count for the acreage total but won’t be built on). Of those lots, the parcel that the obsolete mansion itself sits on is the best and the only one that, so far as I can tell, has (quasi-) deep water frontage and a view down the Sound. Be generous, give that lot $18 million for land, $0 for the house itself. The other lots are either “waterfront” with mudflats in front, or interior. You might carve out two mudflat lots and, maybe, sell them for $5 million apiece, and up to three more interior lots worth maybe $2 million each. That’s $32 million total. It might be more, it might be less, but it’s not $190 million.

See if you can do better than a Greenwich tax assessor

Get out your arborist/silviculturist hat and take a look at this picture of Copper Beech just sent over by Mike Finkbeiner. Does that look like 28 acres of forest to you?  Our town’s thought so, for nearly 4o years.

UPDATE: Readers want a more current photo than the one on the bottom. Here’s Google Earth – still looks like an overgrown golf course to me. Either way, you won’t find Robin Hood skulking in wait for the Sheriff of Nottingham. 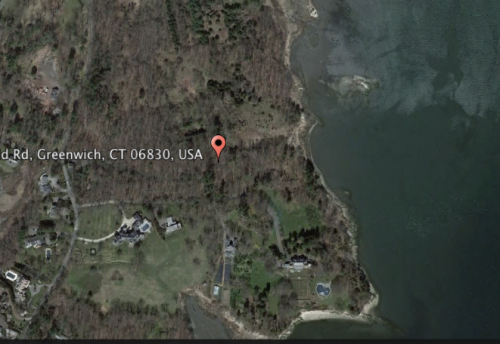 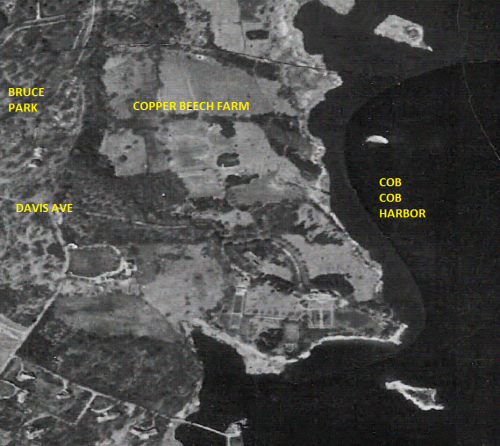