So what’s the story with 58 Dawn Harbor?

A number of readers are curious how this came to be sold and so am I. It showed up today on the MLS marked “for reporting purposes only” meaning it was never really listed but the firm wants the credit for the transaction, and the “asking price” is shown as $14.5 million with a $12.8 million sales price. The former is just nonsense, of course, but was $12.8 a good price?

Without knowing more than the bare recital of the sales announcement, I’d say it was. Two good agents, even if they work for the same firm, each representing his and her client’s interest, should have produced a satisfactory deal.  In better times ‘d have expected to see this house sell for more but these are not better times.

Still, I’m surprised at the relatively low price this went for. 88 Cedar Cliff, right around the corner with beautiful water views but n0 frontage, sold direct for $11.750 to someone who proceeded to tear it down. Pilot Rock, waterfront with a view of 58 Dawn Harbor, sold for $10 million something six months ago and that house, too, is probably not long for this world. In that same association, the Mackey’s place, a pre-fab, is asking $12 and change for what is essentially waterfront land, period. It’s entirely possible this sale was made to a friend or neighbor or the seller simply didn’t want to complicate his life opening it to strangers. He might have gotten more if he had but he’s pocketed his money and moved on, which is never a bad result.

To answer one reader’s concern, fret not – I’m sure the agents managed to get paid their commissions. It’s touching that you worried, though.

22 Pilot Rock , down at the end of Indian Head and right on the water, is listed today for $12 million and change. That’s actually not a terrible price, considering that the last land sale down there (and this property, although it has a nice enough house on it, is definitely a land sale) went to contract last December for $10 million and this has a much better view.  In fact, this is where I would have priced it too. It may not sell for that much – these days, who can tell anything with certainty? – but it’s a good place to start.

Speaking of big sales, what’s happened to the $25 million spec at 253 Round Hill Road? It was supposed to have closed by now – in fact, I’ve heard rumors that today is a drop – dead date but so far at least, no news. If it does sell we’ll finally know what it sold for. I predicted last month that it would end up between $12 and $15 million. I’ve been wrong before, so I can take the shame and humiliation. If I’m right, of course, some sellers of lots on Round Hill currently asking $5 million and above might want to reconsider the value of their land. Or not – there’s probably a very warm feeling one gets from owning land and that’s worth holding on to, for some of us.

How much is a water view worth?

But you can't see the mud at high tide!

21 Willowmere Circle is listed for sale today at $7.450 million. The land is very nice – right up the creek from my own house so naturally, I wish the sellers the very best of luck, but I don’t remember the house as being remarkable (no, that’s not it to the left, I’m just being funny). The seller’s agent must agree, because we have eight pictures on the on-line listing and just two (?) of those are of the house. Hmm. So, for the sake of argument, it’s a building lot with a great pool and wonderful waterviews half the day and fascinating mudflats the rest. How much is that worth? We’ll see. Willowmere Circle is a great neighborhood, so that adds a lot of value too. Again, as a creek neighbor, I’ll watch this one with as much interest as front Row Phil is eying the progress of 2 Nimitz Place in Havemeyer. I was going to post one of those great views, by the way, but the format isn’t supported by this blog template. I don’t know what’s up with that.

Well I saw the $18.6 (or so) Glen Avon house today. The site is not nearly as impacted by I-95 noise as I’d thought, so that was nice. I’m not so sure about the house itself. Ordinarily, I really like builder/designer Alix  Kali-Nagy’s sense of proportion and grace but this house, while graceful, seems to be missing some stuff. There is no eat-in kitchen, for instance, and a breakfast nook and a small I-don’t-know-what -it-is room nearby don’t make up for this omission. It’s not as though Mr. Kali-Nagy forgot to include one so perhaps this is the new trend, or perhaps the rich don’t gather in the kitchen when entertaining the way mere mortals do.

The living room is also small – not unusable, mind you, and I’d love to have its duplicate in my own house, but I envision the $20 million crowd as heavy into business entertaining and this room won’t allow it. Of course, if all your competitors once worked for Bear Stearns, they’re probably out in your driveway parking cars instead of inside sharing Gin and tonics with you. with Maybe room for twelve billionaires is all you will need because that’s all that’s left.

This must have been a custom job whose owner suddenly changed his mind because the paint color choices, while vibrant, are hardly the hues designed to offend the least number of people. No beige or off-white here!

Beautiful master bedroom, nice kiddies rooms, all with really, really special baths. But then there’s a series of odd little rooms with no purpose I could figure out, and I’m not sure what’s up with that.

Basement’s unfinished but I will remind you, the seller has priced this below $20 million – quit your kvetching.

Decent waterviews and the land is further south than I remember so the powerplant is not directly across the harbor. That’s good. I’d have preferred a view up the harbor instead of across, where some other Gatsby mansion has been erected but the lot probably wasn’t large enough to accommodate that siting. Fabulous dissapearing horizon pool, right on the seawall’s edge. I didn’t see a spa/ hot tub but I didn’t look very hard for one, either. I’d think a cigar, a hott tub and the view would go a long way to making this place seem worth a whole bunch of money. Worth  this much? Not to me, but that’s like asking me if I’d like to pay off the national debt. Better to get the opinion of someone who can afford this size home and fortunately, we have just the means to do so: it’s called the market. So we’ll all just have to wait and see.

New construction, with dock (good at high water) off Indian Head, $12 million. Listed today. No indication of size but it’s on an acre so figure around 5,000 square feet plus a finished basement. This was built on land purchased for $5.5 million in January 2008, the last hurrah for the housing bubble, when an acre of Riverside waterfront really did sell for that amount. History of the lot shows that someone made out well – brother Gideon sold the same land but a different house for $2.5 million in 1999, in a bidding war that started at $2.175.

Will the site support a $12 million house? I really don’t know. Riverside waterfront like this has always sold well, and at fancy prices. In a better market, good things would happen for the seller. In this market, …?

Convenient to (the sound of) transportation 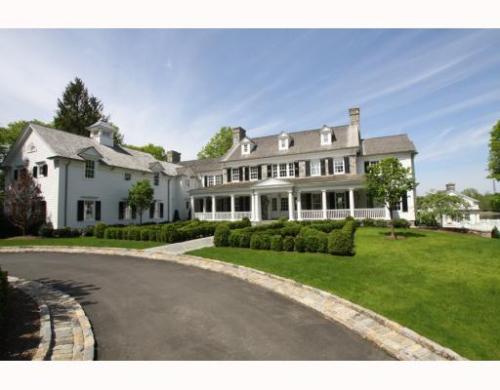 I mentioned before that this house on Glen Avon in Riverside was being “quietly marketed” for $18.9 million. I guess that marketing effort couldn’t be heard above the roar of I-95 across the water because it’s now listed on the MLS for that price. Beautiful waterfront in one direction, a nice view of the old power plant and the railroad and highway in the other, all with 9,000 square feet of luxury. Cheaper than yesterday’s $35 million listing on Field Point Circle, if that floats your boat.

(dig those photshopped clouds in the picture!)

I mentioned last November (December?) that 16 Highgate Road, 2 acres of waterfront (with house) in Riverside at the end of Indian Head had gone to contract. Its sale price was disclosed yesterday; $10 million. That’s a discount from its asking price of $12.9 million but some of us thought that $10 was the right price all along, so I interpret this as evidence that the market for waterfront is still healthy an not, alas for buyers, that it’s going for a song.

Getting real in Riverside

Or at least taking baby steps in that direction. 35 Chapel Lane, renovated in 2007, if you think that new gutters, a driveway and new furnace constitute a renovation – I don’t – came on for sale last summer asking $3.5 million, $1.1 million more than the previous highest  sale on that street. Yes, it’s on a half-acre and yes it is technically waterfront, but that waterfront is shared by the train and I-95, so it won’t enjoy the premium it might otherwise command. Today it’s been reduced to $2.499, still $104,000 above what new construction sold for in 2004. I’m skeptical, but at least the sellers didn’t raise their price.

Comments Off on Getting real in Riverside

Tagged as cars trains but no planes, Riverside waterfront