Not a heck of a lot, just to bring you unexpected news. We’ve seen 29 single family houses go to contract this year: 11 in January, 15 in February and 3 so far this month. Prices? Not so hot, either. There’s the $7.95 Jordan Saper spec house on Perkins, under contract but selling price not yet known, a $6 million sale on 48 Parsonage, today’s $5 million on Bobolink and after that, it’s a pretty quick trip to the low 2s and under 1s, with a brief dalliance in the 3s. None of which is good news for the high end spec house sellers.

Who’s left to buy these houses? It’s cruel to suggest it, but criminals always have money in good times or bad, and usually have the execrable taste to appreciate the excess these houses exude. Consider Long Island. Will the Round Hill Club, fresh from the embarrassment of having members like Walter and Monica Noel exposed in the press, have to make room for new members with less taste but more money? I hope so – it would so much safer, way out there on the 16th hole, if armed, members’ bodyguards were wandering the greens. Especially if those horrible gangs from Wilbur Peck make their way up north!

Ruthie has agreed to a voluntary freeze but that’s not the same thing. According to the NY Post, the feds are building a criminal case against the $65 million cookbook authoress and want to make sure the money’s still around when they prevail. Walt and Monica’s drink parasols are, so far, safe from such thuggery. Skoal!

10:14 – Bernie Madoff plead pleaded guilty just now.No surprise there, of course, but does he go back to his penthouse or go straight to jail? I’m guessing jail, which should be the last of that nice tan we saw him with on Tuesday, but I’ve guessed wrong on this case before. Walt and Monica, taking no chances, are rumored to be heading to Mustique at this very instant, hoping to develop their own tans deep enough to survive a few years under artificial light.

Hanging out in Palm Beach, according to my source down there, who called today with a Walt and Monica sighting.

Just in case you were wondering.

Tagged as Walter and Monica Noel

Even from the darkest cloud, a little sunshine peeks

Thanks to a reader’s tip, we learn that Walt and Monica are back in Mustique! The kids had to stay home, poor dears, no doubt busy with preparing the New York/Greenwich real estate portfolio for sale. But we’ll all sleep better tonight, I’m sure, knowing that thanks to the judge refusing to freeze Noel’s assets, the old guy can still jet down to the islands for a little R&R. He’s had a tough couple of months and deserves a break.

Tagged as jetting to Mustique, Walter and Monica Noel, who says it's your money?

(A little) more on the pending sale of Fairfield Greenwich Group co-partner Jeff Tucker’s sale of his Saratoga horse farm, this time from an Albany newspaper. (Amusing that the New York Post should beat a local paper to the story, eh?). When the Madoff scam first exploded in December Tucker allowed as he’d have to sell off his horses but now the landunderneath them is going too. Of course, what good’s a horse farm without horses?, so this makes sense.

One clarification: “It is absolutely not true,” Tucker told the Albany Times Union, “that any of Walt and Monica’s daughters are part of this sale. Or at least, that’s not anticipated at this time.”

Okay, scratch that idea, what’ll we do now?

A reader reports, “Saw Walter at Round Hill tonight. No Alzheimer’s evident. Mrs. is in Palm Beach. Not being very well received I am told. Selling the house in South Hampton. Not homesteading the PB house which is under renovation. Wouldn’t look good.”

So what’s he going to do now? Bernie’s already used the “I’m weally, weally sick” defense, and it looks as though the “I forgot” excuse was exhausted by all those Obama nominees. This intrepid reporter has found the answer.

I understand from a confidential memorandum intercepted and published for the first time here that the new Noel legal defense will be based on a theory that Walt was force fed alcohol, dropped on his head from a hotel staircase and then forced to invest with Bernie by Joaquin Taveres , the Noel’s mad Brazilian gardener. Where is that gardener now? Captured and deported single-handedly by Monica herself. What a fabulous girl! 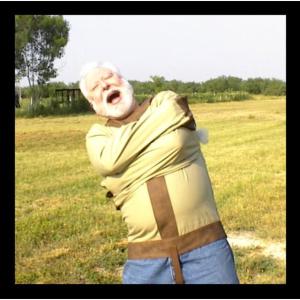 This should be good

Vanity Fair is working on a new in-depth article on the Noel family and its recent troubles. I haven’t seen it yet but I rather doubt it will have the same tone of fawning adulation that the  earlier article about the “Fabulous Noel Girls” did. Monica, better call back the girls’ publicist and put her to work, pronto!

Old silver, mink coats, it’s all for sale, reports CityFile. And if you missed out, CityFile says that the same joint’s unloading ex-Lehman executives’ prized possessions in a week or two. Plenty of time to get down there, but perhaps I can save you the trip: I stopped Monica Noel this morning as she was clambering out of her Range Rover, burdened with armloads of nice-looking men’s suits and a few couture dresses. I asked if she was packing the stuff off to Florida and she gave me a look she’d normally reserve for a Brazilian gardener who might dare to file a workman’s comp claim against her. “That is completely undignified,” she sniffed. “The Noels have always given our castoffs to the Greenwich Hospital Thrift Shoppe and we see no reason to stop now. Imagine, selling Walter’s used underwear. Hmmmf!” I did notice a sign in the Thrift store’s window promising cash for the newly-unemployed’s unwanted clothing but I’m sure Monica would never take advantage of that bit of charity. But if you want to see what she’ll no longer be wearing, stop on in.

Well you liked me when I had money

Mustique neighbors shun Walt and Monica. To be fair, this dislike is not solely related to the Noels losing all their money – the neighbors seem to have invested their own money with FGG and don’t like the results.

Comments Off on Well you liked me when I had money

Will paint for food stamps

And what of that poor Brazilian gardener the Noels tried to deny workman’s compensation to? How’s he doing? We believe we may have spotted him, below.

Comments Off on Oh, the humanity!

Tagged as poverty in Palm Beach, Walter and Monica Noel